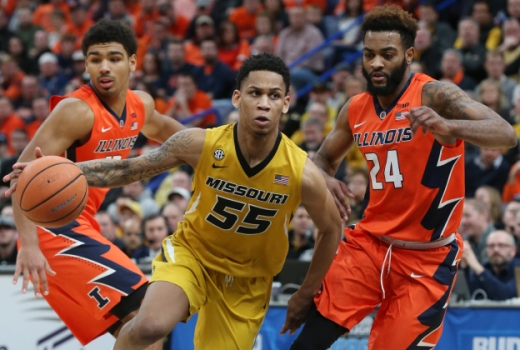 But now the news about Blake Harris, a former ESPN Top 100 guard who came to Mizzou from the basketball-entrenched land of North Carolina, purely to play with Michael Porter, Jr.

Now a lot of people are beginning to hit the panic button quickly. Why? Aside from leading the team in assists with moderate numbers, his points and productivity during minutes isn’t going to be a very big loss at all.

And of course, any “glass half empty” fans will tell you we lost *another* four-star guy, and that doesn’t look good. I get that, but they’re leaving for different reasons (C.J. Roberts and Blake Harris), so I’m not to worried about the culture of the team falling apart, and I just don’t buy into the “Cuonzo has lost the team” sentiment either, there’s no proof of it. Even Harris, who could have really taken any kind of shot he wanted on his way out, said there was nothing wrong with the program (h/t @DaveMatter), and I belive him.

So what does this all mean?

Well, it means that a guy who didn’t have the best attitude about already being “the man”, and finding a way to blame his surroundings, is gone. He was also not likely to stay longer than Michael Porter, Jr’s career at Mizzou anyway, was probably going to transfer afterwards. This means fewer team resources and assets going into a player who ultimately won’t be helping Mizzou.

The big question moving forward is can Terrence Phillips and Jordan Geist step up to lead this team. Both players have had their inconsistencies, but have great speed and defense as well. The success of the team moving forward depends on them more.

As for Harris, he’s probably headed to N.C. State…or kansas if he really wants to try to stick it to Cuonzo.