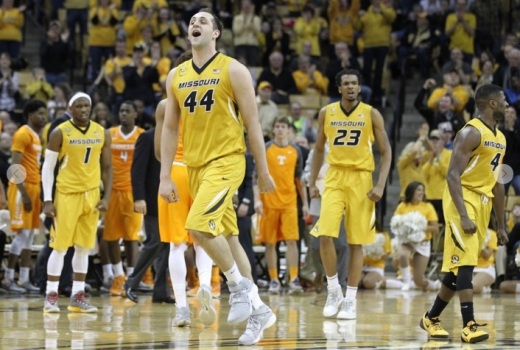 It isn’t often that I have to completely eat my words, but I couldn’t have been more wrong about Ryan Rosburg and the potential that he has as a post man. Now, let’s not get carried away here, he’ll have no place at the next level and you probably won’t see him winning any awards, but he’s won the respect of fans and foes alike.

Rosburg had admitted that he was hesitant of being aggressive with the ball in previous seasons, as his free throw percentage hovered around the 30-percent range. That timid habit forming led to the withdrawal of confidence in Rosburg’s game, something that has been a visible problem.

Until about three games ago, when he began to average around 20 points a game.

His success is a combination of two things; his ability to play within himself, and his teammates recognizing his strong points and feeding him the ball accordingly. Some of the moves Rosburg pulled out under the hoop were shades of his high school days at Marquette outside of St. Louis, where he just dominated.

But I have to say, I like many other fans and writers, thought that Rosburg was as toast as the team in general, and he was possibly in line with Danny Allouche as one of the worst Missouri players of all time. Now, his story reads more like one of the fighting spirit of a team with nothing to really lose or gain, fighting as if they want to make the end of this dysfunctional season the postseason run that they won’t have.